In this recent blog we presented a round-robin VFR flight from Oshkosh to International Falls. The concern was not the initial leg, but the return flight three days later. Would ceilings permit a VFR flight from International Falls back to Oshkosh on Saturday? The 75-hour GFS MOS forecast below provided clear guidance that a morning return would not be very likely given the IFR ceilings forecast along this route. But what really happened?

Original 75-hour GFS MOS forecast valid at 1500 UTC for the return flight Saturday. This clearly shows that a VFR flight from International Falls to Oshkosh will not be possible in the morning.

Turns out the GFS MOS was spot on with the ceiling forecast as shown below on ForeFlight Mobile. While low IFR conditions were much more widespread than forecast, much of the region forecast to be in the marginal VFR flight category or lower were indeed at or below marginal VFR. 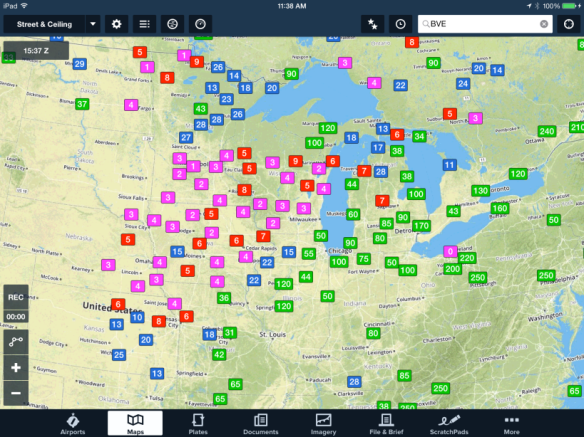 Actual ceilings at 1500 UTC as shown on ForeFlight.

Original 81-hour GFS MOS forecast valid at 2100 UTC for the return flight Saturday. This guidance shows that ceilings were expected to improve later in the afternoon.

By 2100 UTC as shown below in ForeFlight, ceilings began to lift and mix out throughout the early afternoon giving rise to VFR conditions along a good portion of the proposed route of flight. However, there were some marginal VFR conditions still remaining in the vicinity of International Falls and Oshkosh with a few stations reporting ceilings slightly below 2,000 feet. It took a couple more hours before the entire route was truly VFR. Still, that’s not a bad forecast for 3 days out with an error of just a few hours.

The ceilings in the vicinity of the departure and destination airports remained slightly below VFR at 2100 UTC, but most of the route cleared as expected.

While the GFS MOS guidance won’t provide this kind of clarity every single time, it does a surprisingly good job most of the time. Give it a go on your next round-robin flight.