Pilot weather reports are the eyes of the skies. They are not only consumed by pilots, but they are critical data for meteorologists as discussed in this earlier blog post.  For example, SIGMETs for turbulence and icing often live and die by pilot reports. It’s rare to see a SIGMET issued for severe or extreme turbulence until pilots begin to report those conditions. As such they are an important part of any preflight briefing and are even more valuable as they trickle in over ADS-B while en route. That’s why we’ve given pilot report symbols used in ForeFlight a much needed facelift. 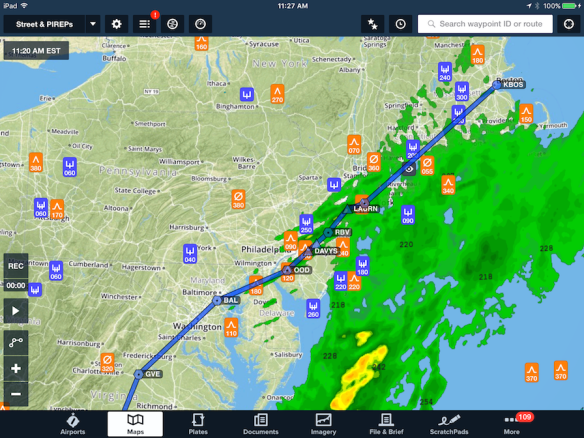 The hunt is over

In ForeFlight Mobile 7.5.2, we’ve significantly enhanced the way you see pilot weather reports displayed in the Map view. Prior to this release, pilot reports were loosely organized into three types, namely, turbulence, icing and sky & weather – each represented by a single pilot report symbol (chevron, snowflake and eyeball, respectively). However, this required you to tap on each and every PIREP marker to see important details such as altitude and intensity. Moreover, routine (UA) and urgent (UUA) pilot reports looked exactly the same. Now, standard pilot report symbology used in this release makes it clear as to the type of report, intensity, altitude (when known) and whether or not it’s an urgent pilot report without the need to tap on the pilot report symbol. So the hunt is over; with the added glance value, the truly nasty weather conditions reported by pilots jumps right out of the glass.

The good, the bad and the ugly

Pilots can include all sorts of things in a report, like seeing a flock of geese or even critters camping out on the runway. But reports of adverse weather (or lack thereof) of turbulence and icing are typically made through a subjective estimate of intensity. In order to enhance the glance value and minimize taps to get information, ForeFlight now uses standard pilot report symbols for turbulence and icing reports. Reports that do not contain turbulence or icing details are defaulted to use the legacy sky & weather “eyeball” symbol. These may contain reports of precipitation, cloud bases and cloud tops as well as outside air temperature and winds aloft (speed and direction).

All urgent pilot reports and reports of a severe nature will be tagged with a red badge to add increased glance value to those reports. For example, shown here is an urgent pilot weather report for severe turbulence at 8,000 ft MSL in the Florida Panhandle.

Above and beyond the different turbulence and icing symbols and to further attract your attention, urgent pilot reports in ForeFlight contain a red badge in the upper-right corner like the turbulence report shown above. These badges will typically be included on a turbulence or icing symbol for a report for severe or extreme turbulence and/or severe icing, respectively.

However, you may also see a red badge included with a weather & sky report like the one shown below. This is typically an urgent pilot report for low-level wind shear (LLWS) or mountain wave activity that did not also include any turbulence or icing details. Also, reports of hail, tornadoes, waterspouts or funnel clouds will be classified and tagged as urgent. 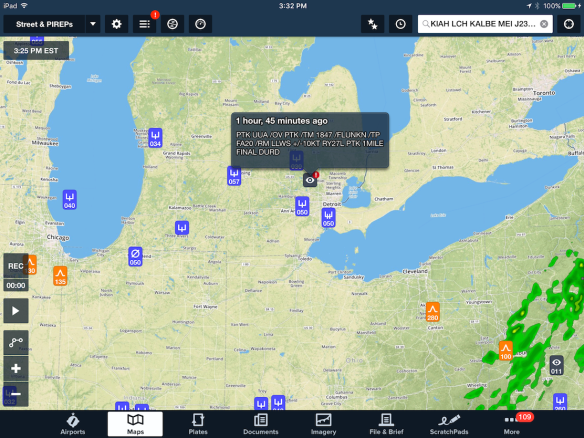 A red badge on a sky & weather (eyeball symbol) pilot report means that the report was tagged as urgent even though no icing or turbulence details were provided. Most of the time this means that low-level wind shear or mountain wave activity was reported by the pilot.

Altitude at a glance 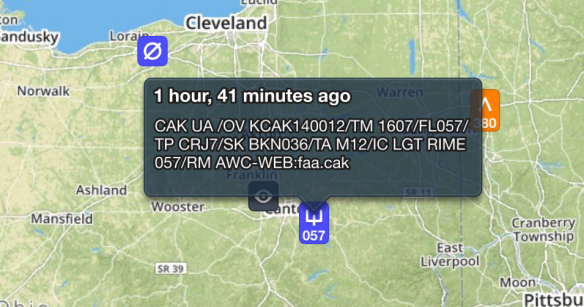 On the other hand, when the flight level is unknown (FLUNKN) as it is in the icing pilot report below, we will just show the appropriate symbol (turbulence, icing or sky & weather) without an altitude. Even so, there may be specific altitudes reported, but you’ll have to tap on the pilot report marker to examine the raw report for those details. In this case, light rime ice was reported between 6,000 and 4,500 feet MSL, for example. 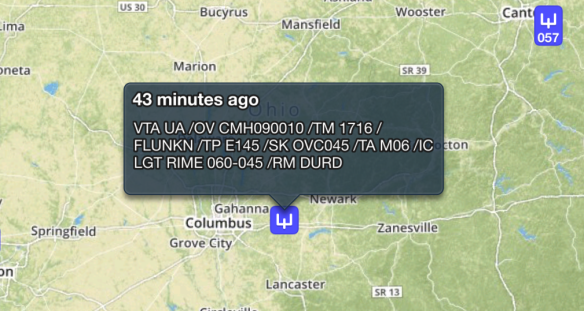 If the pilot reported both icing and turbulence in the same report, you will see a pair of symbols side by side like the ones shown below with the center of the symbol pair representing the actual location of the report. This pair of report symbols indicates light icing and light turbulence at 16,000 feet MSL.

A pair of reports means that both icing and turbulence details were provided for the altitude shown in the marker.

Standard symbology is also used in the display of AIRMETs and SIGMETs for icing and turbulence.

Even though there’s now more information available at first glance, you will still want to examine the details of any relevant pilot reports by tapping on the specific markers. Like anything new, it may take a little while to get used to the new pilot report icons. But we feel that the use of standard symbology is critical for flight safety and these changes will provide less taps and a much higher glance value for determining the location and altitude of the most nasty weather being reported by pilots. Lastly, keep those pilot weather reports coming; they are important for all stakeholders in aviation safety.