Taylor De Ley is just your average 17 year-old pilot:  he earned his glider’s license on the morning of his sixteenth birthday, soloed an SEL airplane that afternoon; he’s logged more than 230 hours in 35 different aircraft – from the Beech 18 to the DeHavilland Beaver; he helped his father finish construction on an RV-4; and he has soloed a 1942 Stearman. All this while maintaining a 4.4 GPA in his Honors and AP high school classes.

Next Saturday, Taylor will depart Corona Airport (AJO) on the aviators version of a walkabout: he will fly the RV-4 he and his father built around the perimeter of the US, stopping along the way at the home airports of active EAA chapters. At each stop,  he will be promoting aviation to local youths. His first stop is Salinas (SNS), where he’ll meet and fly with Sean Tucker. From there, he’ll touch down at 35 more airports, including Key West (EYW). Once completed, Taylor will be the first 17 year old to have circumnavigated the entire border of the US. 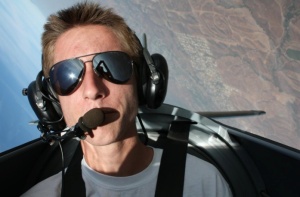 Taylor contacted us earlier this year, asking for support. Being entrepreneurs, we pushed him to get creative and figure out a way to create a product out of his adventure.  The result: Taylor put together a promotional program where sponsors purchase branded aircraft decals that he would affix to his aircraft. ForeFlight purchased one of the first of those decals and has also equipped Taylor with software to help support his flight.

Taylor, good luck. You’re on the adventure of a lifetime and we wish you safe travels. See you at AirVenture.