After naming our two recipients of the EAA ForeFlight Scholarship back in July, they wasted no time starting their aviation adventure. We caught up with Megan and Jacob recently and asked them a few questions about their flight training so far. Sit back, buckle up, we’re going to flight school! 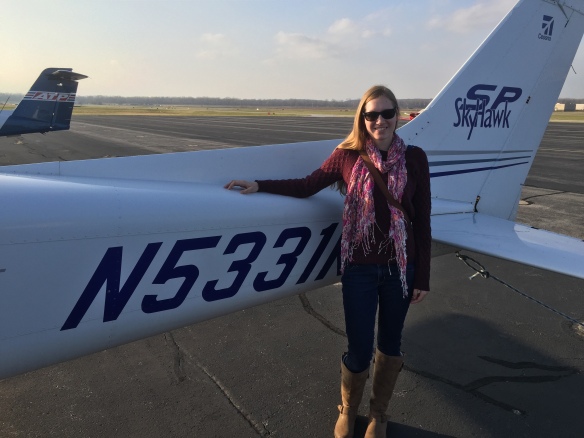 Megan Kerstein
With more interests than hours in her day, Megan set the bar high with lofty goals in mind for her pilot license. Becoming a flight surgeon or aviation medicine physician and volunteering for Angel Flight and Young Eagles were just a few things on her list to combine her two passions. Now, as a full time college student, Megan has officially added flight training to her extracurricular activities. In mid-September, Megan began her flight training at Air Associates of Missouri in St. Louis and online ground school through the Cessna/King Schools training program.

What has been the most exciting thing so far in your flight training?
Megan: It’s been really exciting to see how I progress from week to week. My first few lessons the instructor helped me pre-flight the plane, and now I do it all by myself. I’ve also learned how to talk to air traffic control, which I was initially nervous about, but I’ve gotten much more comfortable with doing it.

Has there been anything unexpected or that you have been surprised by in your training?
Megan: I’ve been surprised with all the factors that go into making a flight–beyond simply getting in the plane with the instructor and heading up to the sky. There’s a lot of preflight planning to look into, weather to check (and keep checking), fuel to check, the aircraft itself which must be meticulously inspected prior to flight, FAA airspace rules to understand, etc. Some of these things I would never have thought of prior to taking flight lessons, but now I better understand the intricacies of all of the “behind-the-scenes” work that goes into making a safe flight.

What have you learned so far?
Megan: I have learned about slow flight, stall recovery maneuvers, landings, pre-flighting the airplane, Air Traffic Control communication, and weight and balance calculations. Flight lessons have also been a great way to learn more about the topography of St. Louis/Missouri. This has helped with VFR flying, since I now know markers I can follow to get back to the airport, such as following the Missouri River.

Overall Megan loves flight training: “I look forward to my weekly lessons and next semester my class schedule allows me to take lessons during the week, so I’ll probably fly a couple of times a week.” said Kerstein. She is looking forward to an upcoming sightseeing-oriented flight where they will fly by the St. Louis Arch, “which will be pretty cool.” Yes, very cool, Megan, and you are one step closer to becoming a licensed private pilot!

Jacob Rasmussen
Seventeen year old Jacob Rasmussen may not know exactly what he wants to do with his license, but he knows he wants to be in the air and that is just fine with us. Jacob searched carefully to find the perfect instructor—a decorated military pilot of 35 years who owns flight schools around the Washington area. Here’s what Jacob shared with us about his experience so far…

How did you select your flight training?
Jacob: When initially starting my search for a flight instructor, I wanted to make sure that I would be able to find just the right instructor to train with. I had hoped for someone with some form of military background. Through becoming more involved and establishing relationships within the aviation community, I was eventually able to find who I was looking for and became well acquainted with Don Karpen of Karpen Aviation. Don was a US Naval fighter pilot and Top Gun graduate. He has racked up well over 12,000 hours total time, with over 8,000 hours as an instructor. As soon as we met and I had an orientation flight, I knew he was the best choice.

Where are you in your training and what have you learned so far?
Jacob: I started with my first lesson on November 14, and since have completed 11 hours total time thus far, with 1.1 hours of it being soloing. Within those 11 hours, I have made 53 landings. I have completed approximately 2/3 of my ground school training and am absorbing all of what I learn very quickly. Being in command of an aircraft has taught me to become very assertive, not only in the airplane itself, but also on the ground and everyday life.

Has there been anything unexpected or that you have been surprised by in your training?
Jacob: The most surprising thing has to be how quick I took to the airplane. Through just a little application of knowledge and perseverance, it has become almost second nature to be defying gravity in an aluminum tube with a bucket seat, powered by a lawnmower engine. I am very appreciative of the opportunity ForeFlight has given me to have the ability to not only pursue my passion, but also be able to complete it in the very near future. Thank you ForeFlight!

Thanks for the update, Megan and Jacob! We will stay tuned for more.