The ground-based radar mosaic displayed on the Map view in ForeFlight Mobile combines radar data from the National Weather Service (NWS) and Environment Canada. Its primary purpose is to provide pilots with a good estimation of where precipitation is occurring and where it’s not. While there are some holes in the coverage (especially in Canada) the radar mosaic is fairly accurate most of the time. Even so, non-precipitation returns generically called ground clutter can be displayed on the radar layer producing what looks like very real areas of precipitation.

Anomalous propagation, or AP, is perhaps the most annoying form of clutter. Essentially with AP, part of the side lobes of the radar beam are ducted or bent down toward the earth during certain atmospheric conditions. This causes it to strike objects on the ground (trees, buildings, cars, etc.) and some of that power from the beam is reflected back to the radar along the same bent path and gets recorded as areas of precipitation. When this occurs you might see on ForeFlight what looks like real precipitation. In fact, it can look remarkably like real convection at times fooling even the most seasoned pilot. 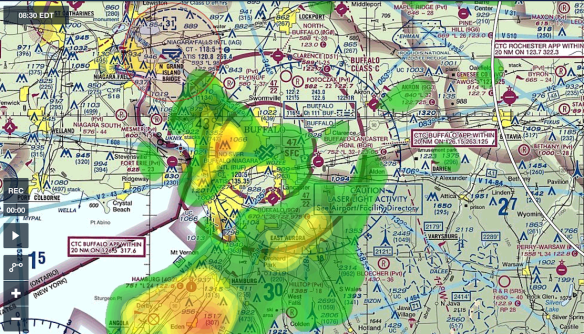 What to do if you suspect AP

Since AP can look remarkably like real areas of precipitation (including thunderstorms), it’s important to always examine the observational data in and around the area. This includes cross-checking surface observations (METARs) to see if precipitation or thunderstorms are being reported. Also, without clouds, it can’t rain. So if clear skies are being reported all around the area, then either the precipitation shown on the radar is very isolated or perhaps it’s erroneous. Keep in mind that automated reports only show clouds that exist below 12,000 feet AGL.

Along these lines, the visible satellite imagery in ForeFlight Mobile can also be useful to identify non-precipitation returns during the daytime hours. If precipitation exists on radar, there should be clouds in that region even if it is isolated convection. If there are no clouds, the returns on the radar are likely ground clutter or AP.

Even when the area is cloudy, AP can still exist. If this is the case and you suspect AP, try looping the radar. Most real precipitation moves and evolves over time, but AP tends to stay anchored over the same area with little noticeable movement. Moreover, the radar loop may look erratic and the intensity may change in a way that’s unnatural.

While AP can occur the U.S. it tends to occur the most in the Canadian Provinces. A favored place is on the U.S. side of Lake Erie just onshore and also in the mountains of the Pacific Northwest in British Columbia. While AP can occur anytime of the day or night, it’s often favored during the morning hours just before and after sunrise. This the time of day where the atmosphere is generally stable near the surface which is a perfect environment to allow the side lobes of the radar to be ducted.

So why can’t AP be filtered?

Filtering the radar of non-precipitation returns is like walking a fine line. If you filter too aggressively, you may remove real areas of precipitation; if you don’t filter enough, you get clutter such as AP displayed. In the U.S., filtering can be automated since the Doppler portion of the radar is available. This can be used to help filter AP and other ground clutter. While Canadian radars are Doppler radars, Environment Canada does not export the Doppler data at this time. Also in the U.S., the NEXRAD ground-based radar systems are all fitted with a dual polarization (dual pol) capability which can provide additional information to filter non-precipitation returns.

At the moment the only way to guarantee that AP from Canadian radars won’t find its way into the ForeFlight radar layer is to add a gross filter before the data reaches the display. This is accomplished by our radar provider by manually turning off the data coming from the offending radar(s). This can be risky since it means that all returns shown from this radar will be eliminated, false or not. The folks at Barons who produce the XM-delivered satellite weather also face the same issue with Canadian radars. They don’t turn off specific radars. Instead they create a manual gross filter that eliminates all returns over regions that are highly unlikely to receive precipitation.

In the end, every piece of information you use to make preflight decisions should be scrutinized even if it comes from a trusted source. Take the time to cross-check the radar layer against other sources within the ForeFlight Mobile app so you won’t be fooled.