Back in June of 2015 the FAA announced that it will remove support for World Aeronautical Charts (WACs) over the coming year (official notice here). You won’t miss out on any coverage in this transition as complete CONUS coverage is already provided by VFR sectionals, and the FAA plans to introduce new VFR charts to cover the Caribbean before the WACs that cover it are discontinued. Printing for most of the paper charts was discontinued in September, while the two charts covering the Caribbean will cease being printed in February and March of 2016.

WACs can still be used as a valid flight planning tool until they reach the expiration date, which for most charts is either one or two years after the issue date. You can view a particular chart’s issue and expiration dates in ForeFlight beneath the chart’s name in the Downloads view.

Below is a table showing the expiration date of every WAC, ordered chronologically. 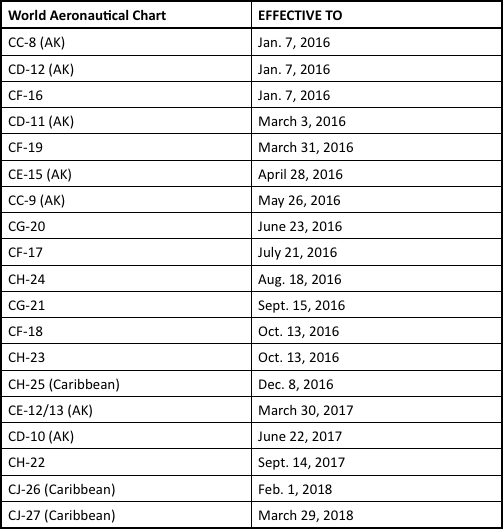 The first three charts will expire January 7, 2016. These are the CC-8, CD-12, and CF-16 charts, covering parts of Alaska and the Northwest. Upon expiration, these charts will no longer be available for download in ForeFlight. If you download them before the expiration date, the charts will remain accessible, but a red “Expired” banner will show in the Maps view when those charts are viewed. At that point they can be removed from ForeFlight by tapping Delete > Delete Expired in the Downloads view.