School is out for summer and our scholarship recipients, Jacob Rasmussen and Megan Kerstein, are already back in the air. If you missed our first follow up with these two, read part one here. Although this Spring brought some challenging weather, Jacob and Megan remained focused on their pursuit of flight. 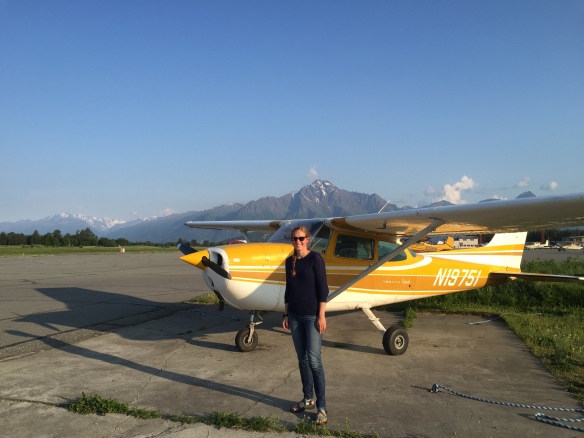 No pool parties and sleeping in for Megan this summer break as she switched hats from full time student to flying humanitarian. Megan is spending her summer on an environmental science/justice internship in Alaska. The organization she is interning with helps indigenous Alaskans and other community members to prevent environmental destruction on their lands. Megan explained that it’s not all work and no play; she’s expanding her flight experience by taking some lessons with Artic’s Air Academy in Palmer, Alaska. Megan reports that “the scenery is absolutely incredible!” 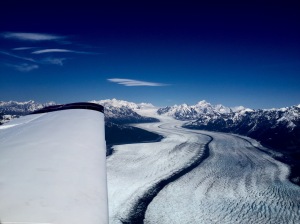 Where are you in your training now?

I’m prepping for my solo currently.

Has there been a flight that sticks out in your mind so far?

My most recent flight in Alaska sticks out in my mind. I’ve never been at the flight controls through mountain terrain, so that was pretty exciting! We flew through mountain passes and then ended up over the Prince William Sound, a gorgeous body of water. We flew over several glaciers on the way to the Sound. The whole experience was unreal!

What’s your favorite part of flying?

That’s a tough one. I love the exhilaration of taking off, but I also love getting up to cruise altitude and taking in the scenery around me while interacting with the flight controls and navigating the plane. For me, cruise flight is when all my skills come together, which is really energizing.

What’s next? Do you have new goals for what you would like to do with your pilots license?

I’m going to fly a couple times a week in Alaska, which should bring me very close to finishing up. From there, I’d love to take some of my friends up and hope that the aviation bug bites them. I just really want to inspire others to get involved in aviation to some degree. I would love to be a mentor for the Women Soar You Soar Program held at Oshkosh AirVenture every year, as that program was very meaningful to me as a participant. 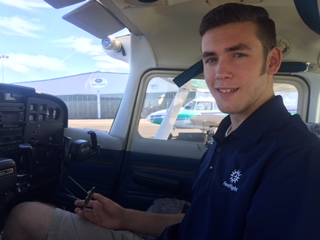 Congratulations are in order for Jacob—when we caught up with him, we found out that he has been accepted into EAA’s Advanced Air Academy SportAir Camp to take place following this year’s AirVenture in Oshkosh, Wisconsin. At this camp Jacob will have the opportunity to gain hands-on experience with composite construction, fabric covering techniques and ground flight training. 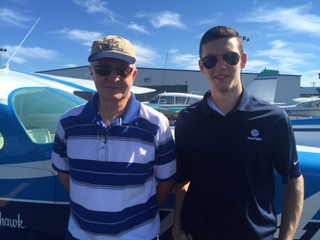 Where are you in your training?

Due to scheduling, weather and other obstacles the last couple of months have been especially difficult getting in hours, however I am working hard on bookwork and ground instruction. I have a total of 18 hours as pilot in command, 1.5 hours of solo time and I am about to embark on my second cross-country flight with my instructor.

Has there been a flight that sticks out in your mind so far?

As empowering and memorable as one’s first solo must be and is, the one flight that has stuck in my mind the most would have to be the first with my instructor. From being pilot in command, radioing the tower, taking off, all the way to wrestling the airplane back to earth, with a death grip on the yoke and my eyes fixated on the runway. I imagine the experience to be like what a rookie naval pilot would have when landing his first F-16 on an aircraft carrier in the middle of a typhoon…it was exhilarating. It was my first glimpse into what many believe to be an impossibility or a mere dream that only the most well off and elite can aspire to fulfill. When in actuality it is more easily obtainable and by no means impossible as one might think. With just a little dedication of one’s time and resources, as well as a true desire to follow through, anything is possible within aviation.

What’s your favorite part of flying?

My absolute favorite part of flying is the feeling of accomplishment and knowledge I get when completing each step to the goal of becoming a private pilot.

What’s next? Do you have new goals for what you would like to do with your pilots license?

My plans as of now, are to continue pursuing aviation as a hobby and potential carrier for the future to help serve my community. I would love to (hopefully in the near future)  learn to fly helicopters while continuing along my training of fixed wing aircraft. My only warning to those who may be interested in flying is that when you start you will never want to quit and if you do quit you will wish every clear day of your life that you hadn’t given it up.

We’ll be checking back in with Jacob and Megan once they’ve officially received their licenses. Until then, we wish them the best of luck with their summer activities that will help take their aviation skills and knowledge to new heights.